Robots on Ice: Skydio 2 Takes to the Sky, Olympian Polina Edmunds Performs, Robots vs Robots Action
January 13, 2020 | SkydioHQ
“This weekend, Skydio 2 took to the air for some robot on robot filming action at the local Robots on Ice event as well as special performance by figure skater Polina Edmunds.” 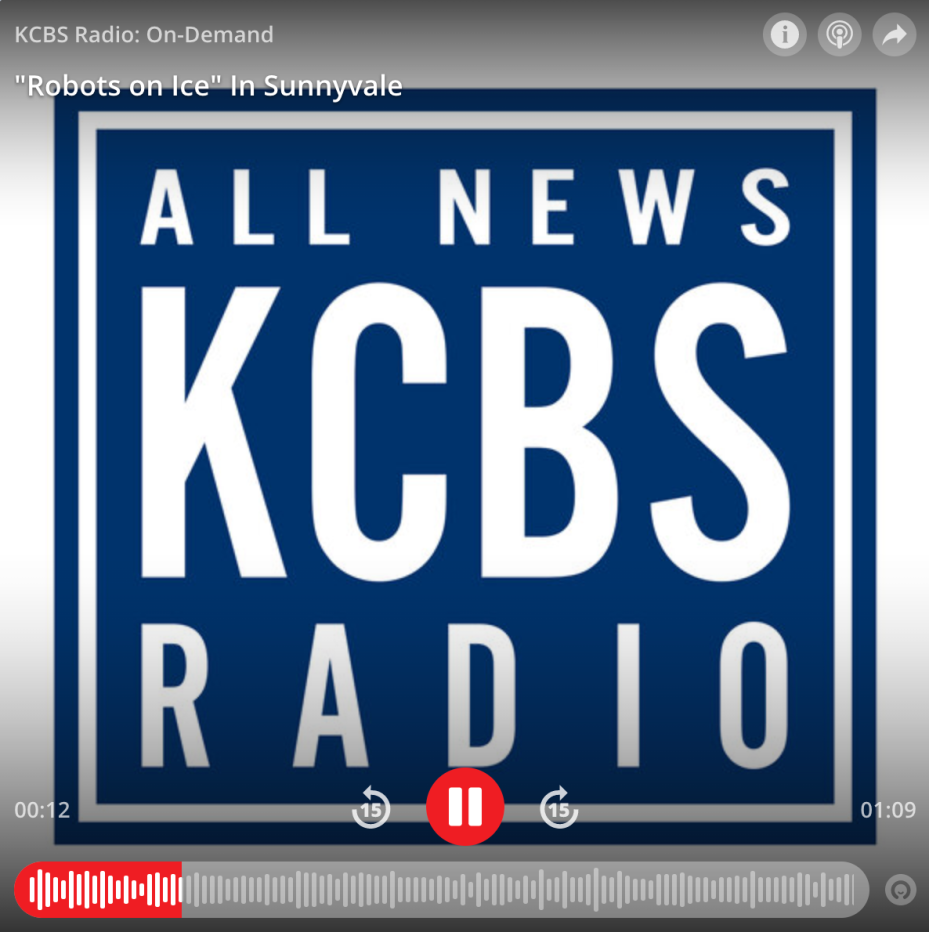 Olympian figure skater shares love of sport in Sunnyvale
January 6, 2020 | Kron4
“Figure skating has been an integral part of my life and I would love to help make it accessible to Silicon Valley residents and enthusiasts…Edmunds and a community group, the Silicon Valley Ice Skating Association, rallied enough momentum to open the new rink this winter. Tech giants including Facebook and Google helped fund building and opening the outdoor rink for the winter. Organizers are now hoping that the rink’s popularity will turn it into a permanent place for skating.” Google helps sponsor new tradition of Sunnyvale Winter Ice Rink
Nov 26, 2019 | Google California
“Google is proud to help Sunnyvale get into the winter spirit as one of the founding sponsors of the new @WinterIceRinkSV . Come sharpen your skates on the ice rink with Sunnyvale residents, employees and visitors for a great new holiday tradition!”

Developer trades back hoes for skate blades for Sunnyvale ice rink
October 25, 2019 | Mercury News
“The rink is a symbol of our commitment to civic engagement and to the type of downtown public events that we hope to host in our future Redwood Square Park,” said Travis Duncan, project manager for CityLine Sunnyvale, in a statement.” 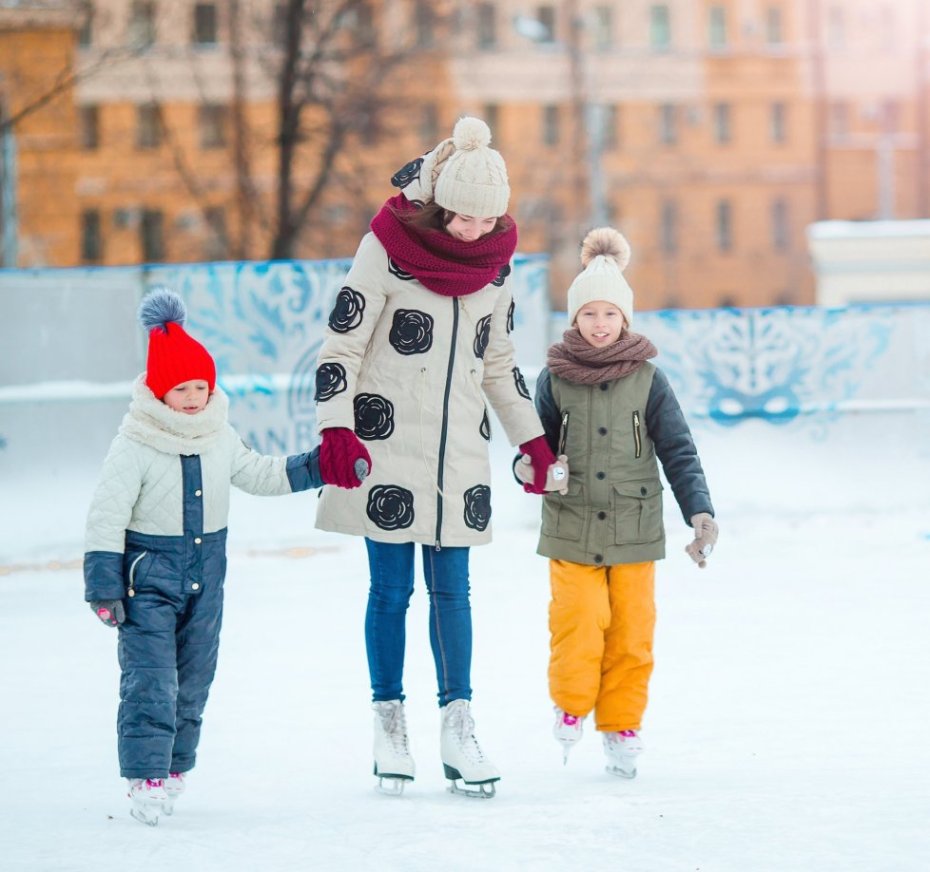 CHASING ICE: CAN CROWDED BAY AREA SKATING RINKS HANDLE POST OLYMPIC CRUSH?
February 19, 2018 | The Mercury News
“Even Kristi Yamaguchi, who grew up in Fremont and won Olympic gold in 1992, is now driving her 12-year-old daughter around the Bay Area for ice time, O’Neal said. For the second year, Yamaguchi plans to donate a “Skate with a Legend” session to the highest bidder at a planned fundraising gala in April to support the Silicon Valley Ice Skating Association’s push for more rinks.”

SAN MATEO ICE RINK TO REOPEN: BRIDGEPOINTE OWNER WITHDRAWS $8 MILLION OFFER TO DEMOLISH FOR NEW RETAIL, SKATE ENTHUSIASTS ‘ECSTATIC’
March 10, 2017 | The Daily Journal
“Sarah Feldman, CEO and co-founder of the Silicon Valley Ice Skating Association, which formed after Belmont Iceland closed and has been working to either reopen it or provide for a location for a new rink in that city, was also pleased by the announcement. ‘Personally, I am thrilled for the success of our sister effort. They have worked so hard for so long… This will be an amazing gem that the community will treasure as a legacy for decades to come.'”

DEVELOPED FEE EYED FOR NEW ICE RINK
February 23, 2017 | Palo Alto Daily Post
“Belmont officials are considering the idea of charging developers a fee to build a new rink to replace one that closed. After the 60­-year­-old Belmont Iceland closed in April, skating enthusiasts have asked city officials to find ways the city could either fund a rink or at least find a location for one.”

IS $8 MILLION ENOUGH MONEY?
February 15, 2017 | Palo Alto Daily Post
“A new rink would cost roughly $15 million to build, according to [SVISA CEO]Sarah Feldman, a Hillsborough resident who is behind efforts in Belmont to reopen the rink there.”

GROUPS TRYING TO OPEN ICE RINKS HAVE A PLAN
January 17, 2017 | Palo Alto Daily Post
“Sarah Feldman, president of Belmont-­based Silicon Valley Ice Skating Association, was a part of the [fundraising] effort to get a [$15M] rink in Goleta… When she found out that her ‘home rink’ in Belmont was closing last April, she and a few skating enthusiasts sprang to action and created a nonprofit, the Silicon Valley Ice Skating Association.”

ICE RINK SUPPORTERS FIGHT FOR PROPOSAL
January 14, 2017 | Palo Alto Daily Post
“‘Burlingame would be lucky to have such a gem of a facility within their city. I know that Burlingame will make the right decision to keep such an amenity in our region and provide recreation for 100,000 or more individuals in the area,’ Skating Association President Sarah Feldman said.”

BURLINGAME: NEW PLAN OFFERS HOPE FOR PENINSULA ICE SKATERS, HOCKEY PLAYERS
January 1, 2017 | The Mercury News
“…the Silicon Valley Ice Skating Association last month persuaded the planning commission to tweak the language of the city’s emerging plan for new downtown development, specifying an ice rink as a possible future use. While pressing for a permanent rink, the association also is seeking a temporary reopening of Belmont Iceland while the property’s long-term fate is decided. The property is reportedly now owned by a private real estate developer. There’s more than enough demand on the Peninsula to support two new rinks, said Sarah Feldman, founder of the association and a Tesla business analyst.”

DOWNTOWN DREAMS TAKING SHAPE: BELMONT PLANNING COMMISSION DISCUSSES DRAFT BELMONT VILLAGE PLAN
December 16, 2016 | The Daily Journal
” ‘Historically, an ice rink has been part of Belmont,’ said Sarah Feldman, of the non-profit Silicon Valley Ice Skating Association… ‘In the past, it has been a great asset, a unique gem which any city would be lucky to call their own. [It’s] something to draw new residents, and something to make Belmont stand out.’ ”

NONPROFIT GROUPS MAKE MOVE TOWARD ICE RINKS
November 5, 2016 | The Daily Journal
“…the new owner of the former Belmont Iceland property has reportedly begun making inquiries about redeveloping the site at 815 Old County Road. But in the meantime, the property has been listed for short-term lease and the nonprofit Silicon Valley Ice Skating Association is hoping it could rent the site to open a temporary facility. ‘We’re working to keep a rink in Belmont. We think it would provide a vibrant community asset to the city,’ said Sarah Feldman, founder of the association… Feldman said the association plans to stay involved in the village specific plan and, after speaking with other rink operators, believes a temporary holiday-style ice rink could serve as an interim solution for preserving skating opportunities on the Peninsula.”

CLOSED ICE RINK MAY REOPEN
November 5, 2016 |  Palo Alto Daily Post
“A group of ice skating enthusiasts has offered to lease and reopen the old Belmont Iceland rink, which has been closed for nearly seven months. The Silicon Valley Ice Skating Association has made a lease offer for the Iceland property at 815 Old County Road to the new owners…. [SVISA founder Sarah] Feldman said that this is just half of the Association’s mission. It was formed with the short term goal of saving the Belmont rink and the long term goal of building a regional rink. ‘We are excited by the chance to reopen Belmont Iceland and fulfill the first half of our mission as an interim solution in Belmont,’ Feldman said.”

PLANS FOR A REGIONAL ICE RINK
September 16, 2016 | The Daily Journal
“…officials from multiple jurisdictions have begun collaborating on ways to address the community’s pleas for a facility since two rinks shut down.”

BELMONT ICE RINK SOLD, STILL NO PLANS
June 23, 2016 | The Daily Journal
“It’s official, the former Belmont ice rink has been sold. However, there’s still no indication on what the new owners plan to do with the property. But a group of local skaters who have rallied to keep it open — even raising millions of dollars — aren’t ready to give up hope. Perhaps most disappointing to the newly formed nonprofit the Silicon Valley Ice Skating Association, it appears to have sold for less than the group offered to the original owner, East Bay Iceland.”

BELMONT’S BELOVED ICELAND SKATING RINK IS SOLD: FUTURE OF CLOSED RINK UNCLEAR
June 21, 2016 | Silicon Valley Business Journal
“Belmont’s Iceland skating rink — whose closure earlier this year sparked a vocal “save the rink” movement — has officially sold. But the buyer’s plans for the 1.5-acre site at 815 Old County Road are anything but clear. The property changed hands in two transactions that closed late last week, according to public property records.” 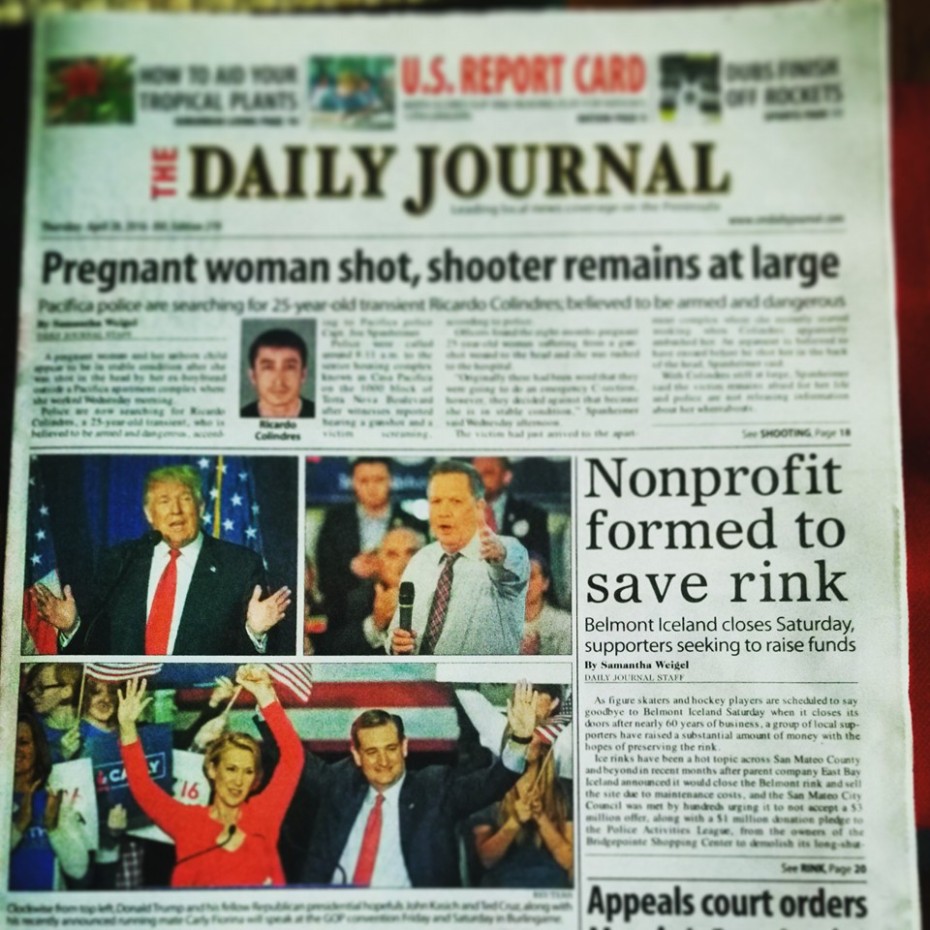 NONPROFIT FORMED TO SAVE RINK: BELMONT ICELAND CLOSES SATURDAY, SUPPORTERS SEEKING TO RAISE FUNDS
April 28, 2016 | The Daily Journal
“This week, the Silicon Valley Ice Skating Association was formed as a nonprofit and is accumulating a hefty amount of donations to try and purchase the Belmont rink on Old County Road.”

JOHN HORGAN: DON’T EXPECT SHARKS’ FISCAL POWER PLAY IN LOCAL ICE RINK DILEMMA
April 27, 2016 | Mercury News
“Despite cautiously optimistic thoughts to the contrary, it does not appear likely that the San Jose Sharks will step in to help to preserve an ice-skating option in San Mateo/Belmont.”

LETTER: BELMONT ICELAND
April 15, 2016 | The Daily Journal
“I truly support any action that can be taken to keep Belmont Iceland for the families and children on the Peninsula. My daughter had an exciting career and now inspires other young kids to greatness. [Ice skating is] such a beautiful wonderful sport along with hockey and gives children such a wonderful opportunity to achieve perfection, and to learn how to compete in the world.”

ICE RINK SUPPORTERS SEEK CITY’S SUPPORT: SKATERS TO ASK BELMONT CITY COUNCIL TO CONSIDER REZONING ICELAND PROPERTY
April 12, 2016 | The Daily Journal
“[SVISA CEO Sarah] Feldman said she hopes the council will take the 3-acre Iceland site into consideration as part of the city’s zoning process — which is the focus of Tuesday’s meeting. While not suggesting the site be restricted to only an ice rink, Feldman and other supporters are advocating for a diverse recreational facility or creative ways to integrate ice skating if the site were redeveloped.”

RESIDENTS WANT CITY TO SAVE ICE RINK
March 23, 2016 | Palo Alto Daily Post
“With emotional pleas, and even a few tears, Belmont residents yesterday called on City Council to intervene and help keep Belmont Iceland alive. The ice skating rink where hundreds of skaters head to weekly for daily free skates, classes and team practices, is coming to a close on April 20, after nearly 60 years in existence… [SVISA co-founder] Crystal Smith, a figure skating teacher at Iceland since 2008, said that the closure was ‘not due to a lack of business.’ She argued that when it closes down, many children’s future in skating will be over.”